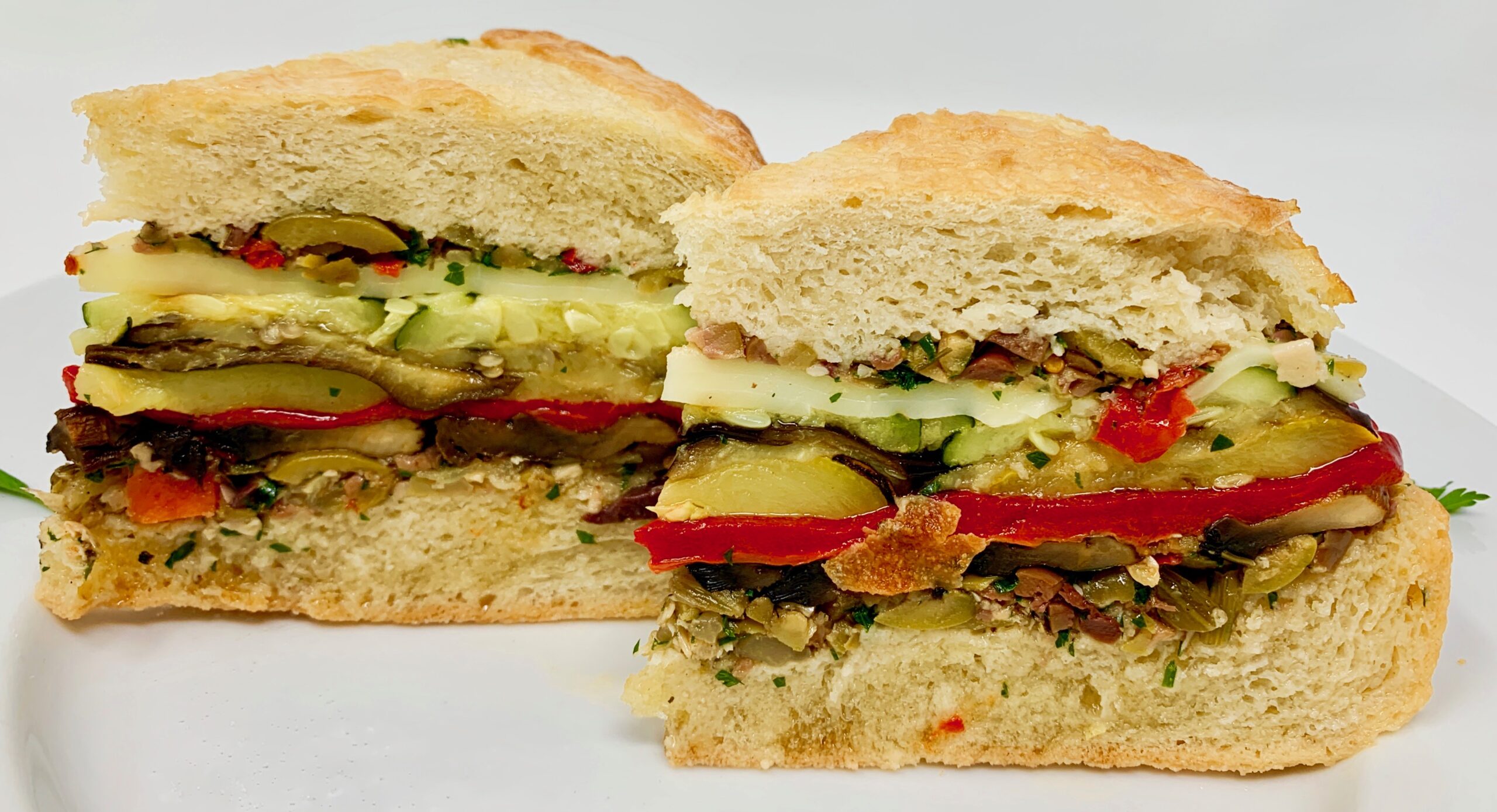 A New Orleans Classic made Vegetarian!

Perfect to serve to a crowd, a great picnic sandwich and a fabulous make-ahead item for a summer party – this vegetarian Muffuletta is absolutely delicious – but bring lots of napkins, this is one messy but lip-smacking, scrumptious sandwich!

A traditional Muffuletta sandwich uses a soft but sturdy bread, uniform thin layers of Italian cold cuts and cheeses, a briny olive salad and patience as the sandwich needs to rest for at least an hour to allow the juices from the olive salad to soak into the bread for optimal flavor.

BE BRAVE and try this wonderfully savory vegetarian version that swaps out the meats with roasted eggplant, portobello mushrooms, crisp cooked zucchini and squash and for ease, store-bought high quality roasted red peppers. I also use a phenomenal bottled Muffuletta mix but if you would like a recipe for a homemade olive salad mix, email me. Want to make it vegan, just eliminate the provolone cheese or use a plant-based version.

The key components to a good muffuletta sandwich are the bread – crusty on the outside so it doesn’t fall apart, but soft on the inside to absorb all the delicious olive salad oil and brine; the olive salad, our bottled muffuletta mix with its perfectly balanced saltiness and acidity, as well as its crunchy veggies; and patience – wrapping the sandwich after assembling it and letting it rest allows the flavors to meld and the bread to absorb all that delicious olivey flavor. The waiting is the hardest part, but believe me, your patience will be rewarded!

Take your tastebuds to New Orleans this summer!

One 10-inch round loaf Italian Bread

Stir together the Garlic EVOO, Tuscan Herb EVOO, garlic cloves and chili flakes in a small saucepan over low heat (undisturbed) for about 12-15 minutes until garlic is softened and golden brown in spots. Remove from heat and let cool to room temperature. Remove the garlic cloves from the oil and mash in a bowl until smooth.

Preheat the oven to 450F. Place a wire rack inside rimmed baking sheets.

Brush the sliced eggplant, sliced zucchini, squash and portobello mushrooms with the cooled oil. Season with salt and pepper and divide among the wire racks in a single even layer. Roast until vegetables are tender and browned in spots (about 20-25 minutes) turning the vegetables halfway through. (You can also choose to place the oven racks under the broiler for 3-5 minutes for squash, zucchini and eggplant and 5-7 minutes for mushrooms)

While vegetables are roasting Stir the mashed garlic cloves into the muffuletta mix and add the minced parsley. Mix well.

Cut the Italian loaf in half horizontally. Spread the bottom half generously with about half of the muffuletta mix. Top with the mushroom caps, bell pepper slices, squash slices, eggplant and then zucchini slices (in that order). Top that off first with the provolone cheese, then with the remaining muffuletta mixture, add the top half of the bread. Press down gently.

Wrap the sandwich tightly in multiple layers of plastic wrap, place on a chopping board and top with a cast iron pan or other heavy object. Let it rest for 1-2 hours at room temperature.

Unwrap, cut into 6 wedges (you may skewer the pieces for easier slicing) and serve.

Want a more classic Muffuletta, replace the veggies in this version with ½ lb each of deli sliced salami, capicola, mortadella and smoked mozzarella. Layer on top of the muffuletta mix alternating meat and cheese along with the provolone from the original recipe.

* The Garlic EVOO and Tuscan Herb EVOO add delicious flavor to the vegetables and the entire sandwich. If you decide to use an Unflavored Oil, double the garlic and add some whole herbs like rosemary, oregano and thyme to the oil while heating. The Roasted Red Peppers and Muffuletta Mix are available at Oil & Vinegar stores. You are welcome to roast your own red peppers at home and feel free to email me for my home made muffuletta olive salad recipe. 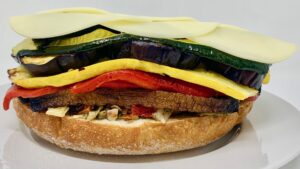 Layered before adding the top and exercising patience! 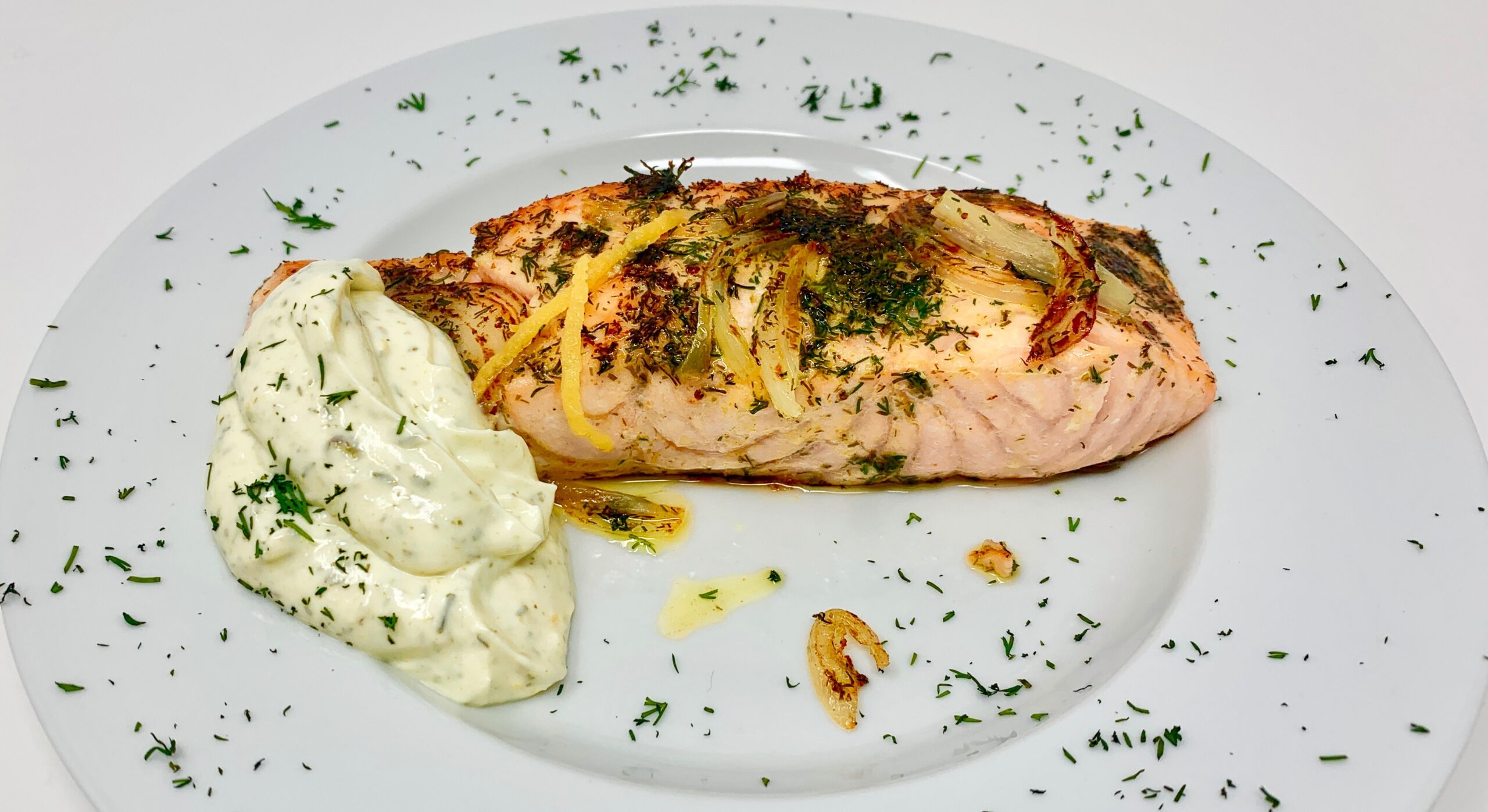